Animated Gifs
Because crack is so much more fun~
I mean in the fandom way :P 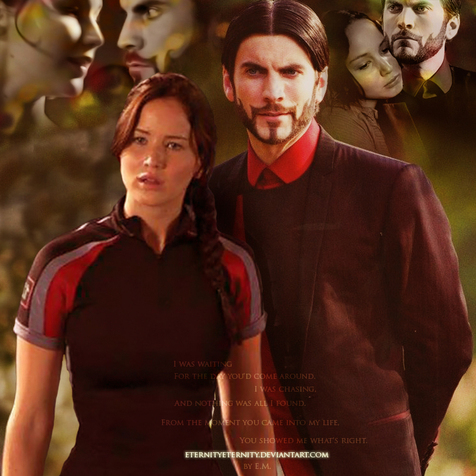 “Meeting you was fate, becoming your friend was a choice, but falling in love with you I had no control over.”

You only know what I want you to
(He's insecure and hides his feelings, so he doesn't tell her everything (especially about how he feels))
I know everything you don't want me to
(But she knows him too well, better than he thinks, and knows him better than he lets on)
Your mouth is poison
(He kisses her when he knows he shouldn't and that this relationship is wrong)
Your mouth is wine
(But he still kisses her because he feels too strongly for her to keep away)
You think your dreams are the same as mine
(He thinks they see the relationship the same way -fleetingdoomedbittersweet -because he's insecure about it, he's blind to the true depth of their relationship/feelings, he doesn't believe they can/should be together or that they can last. She thinks a little differently because she's always been a determined girl -and once she knows the truth of something, she has trouble lying about it, especially to herself)

I wish you'd hold me when I turn my back
(She wishes he wasn't so insecure or denying how he felt, so she tries to be as indifferent, hoping he would chase after her)
The less I give the more I get back
(He's not secure enough to give her a lot of himself, but knows she gives more in return to try to change how he acts -he's happy because it makes him feel loved)
Oh, your hands can heal
(He can save her in the arena and outside it)
Your hands can bruise
(He can hurt her in the arena and outside it, heart mind and soul)
I don't have a choice but I still choose you
(He can't help but love her, even when it will cause his death or bring about his downfall -but even if he did have a choice, he would still choose to love her anyway)

I always will
I always will
I always will
I always will
Joy Williams on the meaning of "Poison & Wine" – Love has a way of ripping you apart just as much as it has a way of holding you together, and this piece is a gut-level-honest tug and pull of affection and affliction felt between two lovers. (Fitting for Senekiss, huh?)
This is my headcanon for these characters. Please don't use them (or the Senekiss headcanon in the 'About Relationship' section) without crediting as I worked hard to craft my own ideas for my fanfictional universes. Just ask -I'm usually very amiable about lending my ideas, so long as it's credited.
“Love is much like a wild rose, beautiful and calm, but willing to draw blood in its defense.” -Mark Overby

Who ordered the pig, eh? Don't mess with Katniss, Seneca...

Canon:
Books: They don't actually ever meet, but his influence on her is apparent when she makes an effigy of him and hangs it to cut a message out to the Gamemakers for the 75th Hunger Games. He was also the one in charge of the games she participated in.

Movies: They've actually met face to face. In an interview with Caesar Flickerman, he was briefly asked about his opinion of District 12 having a volunteer. They were both in the Training Room on the first day and subsequent days after. He was present at her private evaluation, and was as shocked and impressed as everyone else when she shot the apple. He watched her closely during the games, and made the decision for two tributes to become victors and eventually kept that ruling at the cost of his life.

Fanon:
~ Possible scenarios where they could get together include:
~ Meeting a little before the Reaping and becoming close (either somehow in the Capitol or in District 12).
~ Meeting before training starts (maybe in a party in the City Circle, or a chance meeting in the Training Center, or even on the bullet train somehow).
~ During training, with chance meetings somewhere and sometime in the Training Center, or an arranged rendez-vous (either one of those 'arrangements' or just a meeting because of fascination).
~ After the games (where in an alternate universe, Peeta dies, or possibly she's forced to stay in the Capitol, or Seneca lives/survives in some way). Could meet in District 13, or he's allowed to live and meets her either in the Capitol or in her district.

My Headcanon:
~ She likes to wear his dress shirt, especially to sleep in.
~ They can communicate without words or even actions.
~ He can read her simply through her body language, and plainly just understand and read her effortlessly.
~ He's good at distracting her.
~ He's like water to her fire. (Calm to passion?)
~ Holds her together; she fills the void in him.
~ A touch from him calms her, his name spoke by her soothes him.
~ Willing to do whatever for her; abuse his authority, pull whatever strings, set up and arrange anything he can.
~ Teaches her how to make the lamb stew and frequently makes it (and cooks whatever else) for her.
~ He always knows when she needs comfort, and she's always soothed by his presence.
~ He makes her happy easily, and has no problems getting her to smile. He helps deter her or not be bothered by memories or remembrances of the Hunger Games.
~ She really likes his beard.
~ His prep team likes her, sometimes more than him.
~ He's possessive of her.
~ Seeing him in any state of undress makes her flustered and blushing.
~ They like going to sleep together, and he especially likes spooning and cuddling.
~ She's the closest person to him.
~ He only shows deep emotions when it comes to her.
~ He helps her out of socially awkward situations, brings her out of her shell, helps her not be awkward or turn things from being awkward, and helps bridge her to others and vive versa.
~ He helps her understand the Capitol people more, and she helps open his eyes to things.
~ Chocolate chip cookies are his favorite, but hers have become his absolute fav.
~ He's the one who introduces her to her favorite drink -a Cinderella.
~ He's always thoughtful and thinking of her.
~ He's never be more driven or felt more alive than after meeting her, especially when with her.
~ Her nightmares go away because of him.
~ She's always more beautiful to him than anything or anyone else.
~ He can be prideful and arrogant, but she humbles him.
~ Her opinions and thoughts matter a lot to him.
~ He's always accepted everything about her and she's learned to accept all of him.
~ She admires his drinking ability.
~ He thinks she's adorable when drunk.
~ She hates playing any card game with him, especially Bullshit and poker.
~ He loves impressing her.
~ 16 year age difference.
~ In any of my Senekiss' universes, Katniss will always somehow give Seneca a rope necklace.

1. Unrequited by sas93: Katniss Everdeen is the Girl on Gire and the only girl to capture Seneca Cranes' attention. Complete: 14 chapters, 7743 words; rated K.

2. My Immortal by sas93: Sequel to Unrequited. Seneca Crane has made it to the ruined city of District Thirteen, where the thought of one past tribute, the Girl on Fire, keeps him going. Set in Catching Fire/ Mockinjay. In Progress: 6 chapters, 4960 words; rated K.

3. Her Odds Are Ever in Her Favor by LeMockingjayy: Being the President's lap dog felt more like being a prisoner, and Katniss had never been one to enjoy a prisoner's pain, no matter what they had done in the past to get there. Seneca had his own hidden agenda, and it involved the Girl on Fire staying alive. In Progress: 5 chapters, 8945 words; rated T.

4. Spectacle by chiisana-inori: An unexpected spark from the Girl on Fire becomes the very thing that consumes him. In Progress; 2 chapter, 2814 words; rated T.

5. Ever in Your Favor by ChristyRae75: MOVIE-VERSE Katniss had never thought about men, but she finds herself drawn to the one who holds her fate in his hands. A life of ruthlessness has led Seneca Crane to the pinnacle of power. Will his fascination with Katniss destroy his life or save his soul? In Progress: 6 chapters, 7290 word; rated M.

6.  28 Days of February by A-Lucian princess: "Do you know what day it is tomorrow?" I smirk. "No." In Progress: 1 chapter, 1524 words; rated T.
“Love comes when manipulation stops; when you think more about the other person than about his or her reactions to you. When you dare to reveal yourself fully. When you dare to be vulnerable.” -Dr. Joyce Brothers

Capitol Couture: The go-to for Capitol life and fashion.

Ask Seneca Crane: A humorous journal with our very own Seneca answering questions from fans.

EternityEternity: The Hunger Games deviantArt folder of a very talented artist, who also has some Senekiss manips.

The Beard: It now has a theme song...with graphics.

Everyone Likes and Underdog: Awesome Tumblr journal with epic animated gifs and graphics, and a fellow big fan of Seneca Crane.

Interview With a Beard: Exactly that ^.~

“Have you ever been in love? Horrible isn't it? It makes you so vulnerable. It opens your chest and it opens up your heart and it means that someone can get inside you and mess you up. You build up all these defenses, you build up a whole suit of armor, so that nothing can hurt you, then one stupid person, no different from any other stupid person, wanders into your stupid life...You give them a piece of you. They didn't ask for it. They did something dumb one day, like kiss you or smile at you, and then your life isn't your own anymore. Love takes hostages. It gets inside you. It eats you out and leaves you crying in the darkness, so simple a phrase like 'maybe we should be just friends' turns into a glass splinter working its way into your heart. It hurts. Not just in the imagination. Not just in the mind. It's a soul-hurt, a real gets-inside-you-and-rips-you-apart pain. I hate love.” -Neil Gaiman