The Red String of Fate
After the invasion of the ryoka and Aizen’s betrayal, Yamamoto decides he should come up with something to ease tensions and let everyone loosen up. Using the concept of the red string of fate, everyone lands themselves “a fated lover” until the game’s over. Ukitake is paired with Ichigo, and tries to somehow survive some very jealous people. And there’s still the trouble with the three traitors, with plenty of Hollows.
Pairing: Ukitake/Ichigo (Ukiichi); In Progress: Rated T

A Ticket Out of HFIL
The Grand Kai has a challenge! Chosen villians must go to earth and... make Gohan fall in love with them! Who will win? Before the Buu saga . Please read and review!Ch.11 Lack of those monkeys indeed...Project Revision completed chapter 1-12 . Indef Hiat.
Pairings: Gohan/Various; In Progress: Rated T

Moonlight Sonata
Shuichi asks Tohma to play Moonlight Sonata and he gets more than he bargained for...
Pairing: Tohma/Shuichi, past Yuki/Shuichi; Complete: Rated T 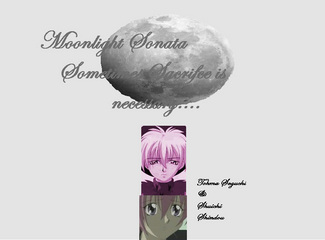 Hikaru no Ai (Coming Soon)
Ogata finds it amusing when Hikaru comes to him for help. Help on what? On how to win Akira's heart, of course! But it becomes too complicated when Ogata falls in love with the boy as well, not to mention Hikaru's connection to Sai.
Pairings: Ogata/Hikaru, Hikaru/Akira (one-sided for now); In Progress: Rated T (possibly M(R))

Split Hack
Hikaru was turned to the hacker world at an early age. Haunted by Sai, he reluctantly integrates Go into his carefully crafted world. Of course, he uses multiple personalities as an excuse to everyone else.
Pairings: Eventual Ogata/Hikaru; In Progress: Rated T

Beautiful Disaster
He lets her touch him but she doesn't know why. All she knows is that he's beautiful...
Pairing: Suikotsu/Kagome; Complete: Rated T

Kagome Higurashi! No Need for Shichinintai
Due to the jewel shards on their necks, the last four members of the Shichinintai were somehow able to travel to Kagome's time. Unfortunately for her, the well has sealed up. At least they don't have their weapons!
Pairings: Kagome/Shichinintai, side Kagome/Inuyasha...; In Progress (Indef. Hiatus): Rated T 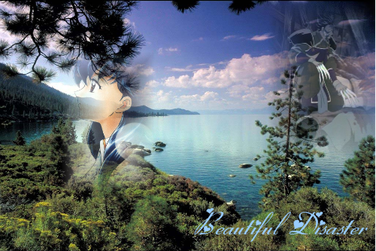 Starlight Backdrops (Coming Soon)
Yoshio makes an offer to Haruhi, using her scholarship status against her. Now she’s stuck between his and Suoh Yuzuru’s attentions, trying not to get lost in their machinations. At least she has Kyoya and Tamaki for help.
Pairings: Yoshio/Haruhi, side/minor Yuzuru/Haruhi, Kyoya/Haruhi, Tamaki/Haruhi, etc…; In Progress: Rated T

Loyal to the Game
All Ash Ketchum has ever wanted was to be the best. Ash's dream was to be the unbeatable, greatest and grandest Pokémon Master there ever was. So now of legal age to get a Trainer's license, Ash can start the road for just that. Problem? Ash is a girl. And the world is full of perverts as her mother had warned and so Ash Ketchum the girl must become Ash Ketchum the boy.
Pairings: Ash with a lot of people (mostly one-sided), Ash/Lance and Ash/Steven for sure; In Progress: Rated T

Gained the World (Coming Soon)
Reishin always seems to go overboard for Shuurei. He even willingly said he’d marry her than give her to some brat. Shouka finds that he’s too worried about Hyou Riou’s potential danger to his daughter and finds that maybe he should teach Reishin to watch his promises. Therefore, Reishin finds he’s going to marry Shuurei and things get a little crazy.
Pairings: Reishin/Shuurei (main), one-sided (obsessive) Riou/Shuurei, one-sided Ryuuki/Shuurei, maybe one-sided Seiran/Shuurei, maybe one-sided Kijin/Shuurei, slight Kouyuu/Shuurei, almost Shuuei/Shuurei, Eigetsu/Kourin, Shouka/Shusui, past Shouka/Shoukun, and one-sided past Riou/Shoukun; In Progress: Rated M(R)

KOI Kiss (Coming Soon)
Two more dolls. That was what he wanted. Instead, in exchange for her very existence, Kotoko Kashiwagi becomes nonexistent to all but Yuta and the others of Fool Rod. Where is she and what happened to her? In fact…what deal did she make?
Pairings: Yuta/Kotoko, some Kotoko/others; In Progress: Rated T

Under My Umbrella (Coming Soon)
Hikaru Takabayashi just wanted to be normal. Her love life is crazy (nonexistent to her) and now her biggest secret is out. Hikaru Takabayashi, huh. Isn’t she the international idol? Watch out, Izumi! Your best friend’s in way deep.
Pairings: Hikaru/Ayase, Hikaru/Habashi, Hikaru/others (crushes/one-sided/flirting/etc.), comical and one-sided Kurobe/Izumi; In Progress: Rated T

Knights of the Old Republic Comics

Breathe Me (Coming Soon)
Fem!Zayne and Male!Zayne Star Wars was in a galaxy far, far away, a long time ago. That's how the story goes. So millienia later, reincarnation does the trick for several characters bound to live new lives on Earth. Zayne is female and a student in high school. Lucien's an English teacher, who hates his job and sees visions of his past life. The others are mixed in there somewhere. And somehow Anakin Skywalker is also grouped in with the KOTOR folks. It's a strange world.
Pairings: Zayne/Lucien, Zayne/Others; In Progress: Rated T

Color Me Blue (Coming Soon)
Fem!Zayne Zayne Carrick is a genius. And genii don’t have it easy, especially when the government takes you and cuts into your head, playing God with your life. What will happen to Zayne now that they’re back to looking for her, because they need her special abilities?
Pairing: Revan/Zayne/Lucien; In Progress: Rated T

Dead Men Walking
A new evolved species is coming. How can the Force hold up against those with abilities like reading minds, phasing through walls, or indestructibility? And not all of them are hesitant to use their powers. Zayne Carrick has Claire Bennett's power. Arkoh Adasca is a twisted version of Hiro. In this AR, instead of the Tarisian Masters killing their Padawans, they're pulled into a bigger conspiracy of people who could be worse than Sith. KOTOR Heroes.
Pairing: Lucien/Zayne; In Progress: Rated T

Forces of Nature
A collection of Lucien/Zayne drabbles, from the Knights of the Old Republic comics
Pairing: Lucien/Zayne; In Progress: Rated T-M(R)

Repentance (Coming Soon)
Two timelines rest aside each other. When the Jedi Taris Masters are shown the future, they can’t possibly go through with murdering their Padawans. And Zayne had secrets that make bitterness a hard pill to swallow. The Revanchist is large part of it.
Pairings: : Zayne/Revan, Zayne/Lucien; In Progress: Rated T

Sith Me This (Coming Soon)
Zayne Carrick is still bitter. The other Padawans, somehow surviving the assault, are slowly forgiving, but Zayne can’t let go. What happens when he has to go on the run again, this time with the other Jedi Padawans and Masters? A lot of crack, humor, drama, shopping, and whole lotta shit…
Pairings: Zayne/Lucien, Zayne/Others; In Progress: Rated T

The Brighter Side of Things (Coming Soon)
Fem!Zayne Zayne wants to tell everyone she’s not crazy. She’d like to tell them that without looking even more crazy. But when she can communicate with ghosts and no one else can, that’s a hard sell. But maybe Lucien Draay can help her out a bit.
Pairings: Zayne/Lucien, one-sided Zayne/Revan, odd Exar Kun/Zayne; In Progress: Rated T